Is this the end for arts and culture?

Despite the £1.57bn recovery fund provided by the UK government, social-distancing measures to curb the spread of coronavirus have sharply exposed the fragility of an industry so reliant on drawing in crowds. Lucy Douglas reports 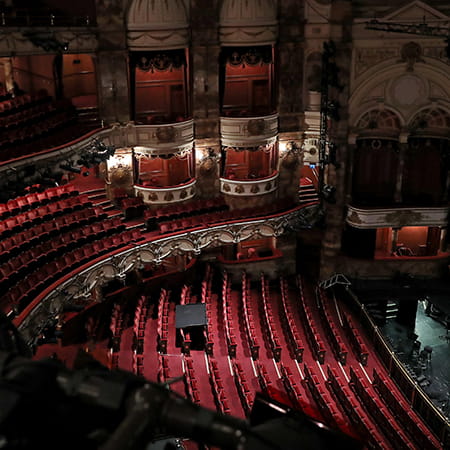 The last day of September saw an unusual army of protestors descend on Parliament Square. Pantomime dames – decked out in full, vibrant costume and make-up – were marching to draw policymakers’ attention to the plight of the theatre industry, and calling for an extension of the furlough scheme that has supported businesses in covering employee wages since the coronavirus crisis took hold in the spring.

The dames are facing a quiet Christmas. As most of the country’s theatres remain shuttered, the panto productions that are usually a staple of the festive season have been cancelled. It may not seem like much of a sacrifice amid the wider devastation, but for regional theatres, the panto can account for as much as 80% of the year’s revenue.

“For a regional theatre, the one production that will always sell out is the panto,” says Tracey Bates, who runs a consultancy to help museums, galleries and theatres increase their income.

Measures to curb the spread of COVID-19 have proved disastrous for the arts and culture sector. Lockdown forced the closure of galleries, museums and theatres, just as it did restaurants, bars and many shops. But while retailers and hospitality businesses have been open again since the summer, the new rules have made it impossible for many cultural venues or events to run.

Support via the government’s £1.57bn Cultural Recovery Fund, announced in July 2020, was still being processed in early October. According to Arts Council England’s CEO Darren Henley, the fund, though significant, “will be nowhere near enough to support organisations to emerge from the crisis unchanged”.

Museums and galleries are welcoming a fraction of the visitors they would typically see, due to the loss of international tourism and general wariness of crowded public spaces.

The Victoria and Albert Museum announced that it would be letting go 10% of its workforce; a spokesperson told The Art Newspaper in September that the museum was experiencing a 70% drop in self-generated income and an 85% drop in visitor numbers.

The Tate is cutting 313 staff members, while the Southbank Centre, which is trying to navigate the crisis alongside its £21m of debt from renovations 15 years ago, made 322 employees redundant.

Secondary income sources have also taken a hit. With fewer visitors, sales at the in-house shops and restaurants are well down. And for some, the cost and logistics of running the cafe with social-distancing measures make it not viable to open, explains Bates. Venue hire for events, which accounts for a significant portion of revenue for many institutions, has evaporated. “Museums are charities, so you’re running on a shoestring anyway,” Bates adds.

But such large institutions are only the tip of the arts industry iceberg. “Within the cultural industries – performing arts, music, visual arts – there are only about 100 organisations with more than 250 employees. And you can probably name them,” explains Claudia Burger, policy insights manager at the Policy and Evidence Centre, a division of Nesta, the innovation foundation that works with arts and sciences. The vast majority of this industry is made up of micro-organisations (those with fewer than 10 employees) and freelancers.

Falling through the cracks

In the performing arts, everyone from the cast to the seamstresses backstage is typically self-employed. It’s a similar story in the live events industry, which covers gigs and music festivals as well as exhibitions. According to campaign group #WeMakeEvents, which is calling for better support of the industry, around 70% of workers in the sector are self-employed. Many workers in this sector have found themselves ineligible for government support – unable to use the furlough scheme and priced out of the support for self-employed people.

Fiona Lockyer is a freelance production manager with a background in theatre, who works on everything from music concerts to corporate and charity events. Although she qualified for the self-employed freelance support scheme (SEISS), she says she is “one of the lucky ones”.

“So many of my friends and colleagues have fallen through the cracks. They’re limited companies, so they weren’t allowed to claim SEISS. They’ve got partners who are working, so they can’t claim universal credit.”

Struggling to break even

Although theatres can officially reopen, social-distancing measures have made it both impractical and economically unviable to stage their productions. According to a PEC report, many venues only break even when the audience reaches 60% of the capacity – and that is for cheap productions. Musicals, with larger casts and staging requirements, or operas, which have a full orchestra, may need as much as 85% of seats filled to start making a profit, says Bates. The average cost of staging the big West End musicals is around £700,000-£800,000 a week. “So you can’t socially distance an audience and have it anywhere near a break-even amount,” she says.

The few theatres that have reopened are staging productions with minimal cast and crew: the National Theatre’s one-man production Death of England: Delroy, and the Bridge Theatre’s Talking Heads programme of monologue shows, which have included performances by big names such as Kristin Scott Thomas and Maxine Peake.

Although such productions will help to keep revenue trickling in for the theatres themselves, they offer few opportunities for actors and crew to earn a living again. “A lot of people are now getting other jobs,” says Bates. “In theatre, a lot of people won’t be able to come back.”

For live music events, it’s a similar story, which has been catastrophic for the thousands of freelance workers and small businesses involved behind the scenes in running gigs and festivals. “The industry is on its knees,” says Lockyer. “I know a few people who have got odd jobs going on, but most people have had their years cancelled.”

The whole live events sector (which includes exhibitions and corporate events) generates £100bn a year. Lockyer explains that an arena show for a big-name artist will involve around 400 backstage crew – everyone from truck drivers and caterers to sound technicians and backing dancers. “We spend many years learning our trade and this is why we, as an industry, can deliver the opening ceremony to the Olympics and can put on Glastonbury,” she says.

Lockyer warns that unless the sector gets the help it needs, the country’s beloved live events won’t be able to run when things do get back to normal because the suppliers will have gone under. “It’s all very well saying, ‘we can go to Glastonbury in 2021’ – not if you don’t have any supply companies. Not if you haven’t got any techies or any crew.”

One challenge is that quantifying the true value of the country’s arts and culture sector is an impossible task. “We intrinsically know that arts are good for our wellbeing, but it’s so hard to prove,” says Burger. “It’s much harder to say, if galleries close entirely, what do we lose as a nation? Or theatres? Or if you lose a community arts hub?”

More people went to see a West End show in 2019 than went to a Premier League football match, according to Bates. But everyone in the industry is quick to point out how much the arts contribute to wider ecosystems beyond the institutions themselves. According to a Visit Britain survey, 43% of international visitors to the UK went to a museum or gallery during their trip, and 14% went to the theatre.

"It’s a huge part of the UK’s soft power,” says Claudia Burger. “People come to London to see a show at the West End, so [our industry] supports hotels, the general tourism industry,” says Lockyer. “You might book dinner at a restaurant beforehand, or go to the pub afterwards.” Venues such as the O2, she adds, have numerous bars, restaurants and shops on site. “All of that gets supported if you’ve got 20,000 people coming to see a show.”

And that’s just the visitors. Large sums are also spent on keeping crew fed or performers costumed while a show is in town. “Then you’ve got artist riders,” adds Lockyer. “I have, before now, spent £2,000-£3,000 at a local whiskey shop.”

An estimate by the Centre for Economics and Business Research in 2019 put the contribution of the Edinburgh Festival to the Scottish economy at just over £1bn. The 2020 festival was cancelled, and it’s currently unclear if it will take place in 2021.

Many in the industry paint a bleak picture of the future. For some theatres, the recovery fund has come too late: Nuffield Southampton Theatres had already announced its permanent closure when the support package was announced. Bates predicts that regional theatre will be worst hit by this crisis and is concerned about the damage that it could do to the industry.

“What a [regional] venue does during the day – it usually has a programme for young writers, acting classes – none of that will exist, so it’s not just a venue closing, it’s losing people’s ability to get into the arts,” she says. “Someone like James Graham, the playwright, his entire work was from regional theatre, and now he’s one of the world’s greatest playwrights. For arts to thrive, you need it to be throughout the country.”

She says the likely outcome will be small audiences and high ticket prices, as well as more ‘safe’ productions, such as ‘jukebox’ musicals and plays starring A-list actors, which routinely sell out.

For museums and galleries, she’s more optimistic. “Things will change, but it might be a change for the better. Museums and galleries will be in huge debt when they come out of this, so they will have to be a bit braver and have a more entrepreneurial spirit. It will be interesting to see who leads the way. In the next 12 months, we’re going to see a significant amount of regional museums closing, sadly. But I think the ones that survive will be better for it.”

Cultural recovery fund: at a glance

Grants/loans for the 17 institutions directly funded by DCMS, which include the Tate, the British Library, and the National Gallery

Grants for theatres, music and comedy venues, and museums, via Arts Council England

The arts in numbers

Total revenue of the arts and culture sector in 2016

Average GVA per worker in the arts, compared to £46,800 for the wider UK economy

The number of jobs supported by the arts industry