Brexit: the challenges at the border for UK businesses trading with Europe

The government has hinted of friction at the border. Peter Taylor-Whiffen explores how challenging it will be for UK businesses trading with Europe 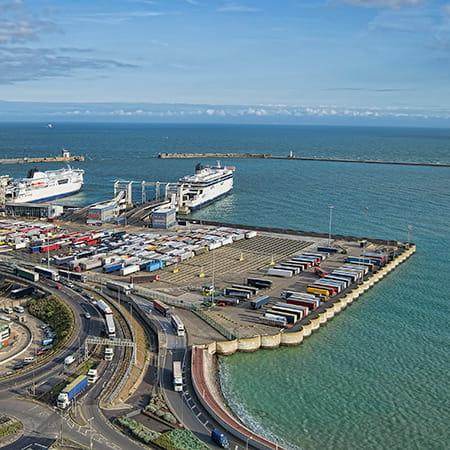 In four months’ time, nearly half a century of frictionless trade between the UK and most of the rest of Europe will summarily end.

Whatever form a Brexit deal may or may not take, whatever the rules on fishing rights, state aid or the myriad other issues that still seem to position both sides as far apart as ever, UK companies that trade with European partners will have to adjust to new import/export rules.

Without a deal, tariffs will have an obviously adverse impact. However, the physical borders will likely see UK firms having to factor in more time for supply chains and deliveries. A lot of extra time, in fact, enough to make an extra 400 million customs declarations every year.“

As border checks are introduced, delays at ports will build as backlogs grow,” warned CBI Director-General Carolyn Fairbairn in an FT article in July. However, the government insists that while border checks will by definition be mandatory and necessary, it is working to make them as smooth as possible. But how smooth will they actually be?

Michael Gove announced a £705m investment to “make sure our borders are ready for full independence”. The new infrastructure, more jobs and better technology would, he revealed in July, “make our country more secure and our citizens safer… when the UK takes back control on 1 January 2021”. It would also, he added, lay foundations for the government’s grand ambition “to build the world’s most effective border by 2025”.

The announcement was accompanied by the publication of the Border Operating Model detailed in a 206-page report. The Border with the European Union: Importing and Exporting Goods sets out the full range of checks that importers, exporters and hauliers will need to comply with to trade with the EU.

As for the physical border, 12 inland customs centres are being built around the UK to support ports that lack the necessary space or infrastructure to conduct checks and process additional paperwork. Five will be in Kent, the UK’s most-used gateway to the continent, which is expected to process 10,000 trucks a day from Dover or Folkestone to Calais or Dunkirk.

The investment includes £235m for IT systems and staffing, including 500 more Border Force personnel, and £470m for port and inland infrastructure, much of which is going to the confirmed Kent sites at Manston Airport, the STOP24 lorry site at Folkestone, the Ashford International Truckstop and another at Ebbsfleet Station.

But the government is still consulting on the fine detail and some sites have still not been publicly announced because of “confidential commercial” reasons. Wherever the sites are, the Border Operating Model advises all businesses to get a GB Economic Operators Registration and Identification number, which is required for all businesses moving goods into or out of Great Britain. It also advises businesses to employ a customs intermediary because “customs declarations are complicated” and not doing so will require buying specific software to access HMRC systems.

“Our underlying objective in all this work will be to enable trade in goods to continue to flow smoothly between the UK and the EU,” said Transport Secretary Grant Shapps. But he also admitted: “There is at least initially a risk of some additional friction at the border – notably if goods arrive without having completed the necessary customs and other processes.”

In expectation of this friction, the government announced in August preparations to reactivate its Operation Brock plan to divert 2,000 EU-bound lorries on one lane of the M20 while keeping the rest of the motorway traffic moving on a contraflow system.

The Department for Transport (DfT) consultation document said that anticipated “low levels of trader and haulier readiness” along with the “knock-on effect” of customs checks in Calais had prompted it to reintroduce Operation Brock.

The scheme was first introduced late last year to replace Operation Stack, which had turned the M20 into a temporary lorry park. Operation Brock has been no less hated by hauliers, but its new incarnation will use moveable concrete blocks rather than metal barriers, meaning the road system can be changed within hours rather than days.

Yet all this is just to manage border delays that are virtually inevitable. Logistics UK, formerly the Freight Transport Association, has previously warned that two minutes’ extra processing time at Dover would form a 17-mile queue – and eight minutes would see queues back to the Dartford Crossing and into Essex.

Such delays should theoretically be eased by the government’s introduction of a digital Kent access permit (KAP), a single-trip, 24-hour document required by hauliers to use the designated port access roads. These will be issued to drivers who have received a green or amber rating from a new government Smart Freight system, designed to ensure goods are ready to cross the border before their journey begins.

Failure to have a KAP will result in the driver being personally fined £300, but critics are suggesting this merely creates a border between Kent and the rest of the UK.

“Our members are dismayed that the onus for compliance will be placed on drivers themselves,” said Logistics UK’s Chris Yarsley, Policy Manager for Road Infrastructure. “The current proposals create an internal UK border by introducing KAPs, adding more red tape to the work that hauliers will be obliged to comply with.”

Inevitably, opposition politicians are just as sceptical. Rachel Reeves, Gove’s Labour opposite number as Shadow Chancellor of the Duchy of Lancaster, suggested that far from confirming Prime Minister Boris Johnson’s promise of an “oven-ready deal”, publishing new guidelines so close to the 1 January cliff-edge would leave businesses wondering “if the oven was even turned on”.

Certainly, there may be an irony to the government’s zippy new Brexit campaign “let’s get going” if hard borders delay UK goods actually going anywhere. Many businesses that rely on just-in-time delivery models – manufacturing and supplying component parts only when they are needed – are already stockpiling inventories to guard against worst-case scenarios, which means finding and funding the space to store them.

“We are building up the Brexit buffer again,” Lindsley Ruth, CEO of FTSE 250 company Electrocomponents told the FT. “Last time that was about £30m of fast-moving inventory.” Carmaker Bentley has increased its warehousing to carry 10 days’ worth of parts – five times as many as usual for a company in an industry where components can criss-cross borders several times during the manufacturing process.

The problem is arguably more acute still for those moving livestock. The DfT conceded in its Operation Brock consultation that animals could die through post-Brexit port delays. The document suggests animals and live products could lose up to 60% of their value if they don’t reach their EU destinations “within one or two days”. “They cannot be fed in their vehicle, and delays risk dehydration and mortality,” reported the Independent.

With many businesses sifting through the economic wreckage of COVID-19, the government’s biggest Brexit challenge will be to ensure businesses are ready for 1 January. No small task, according to economist Dr John Glen, economic adviser to the Chartered Institute of Procurement and Supply. “Getting business engaged, when they are still trying to survive coronavirus, will be a major challenge.”

And, he added, completing new customs areas and technology by January will also be a challenge, for the government, the hauliers and those trying to do EU trade. “All of these pieces need to be in place,” he said, “to keep the trucks rolling.”

Join the Business and Management Faculty

This article is freely available for a limited time. It was originally published under the title "Brexit Eye - September 2020".

Business and Management Faculty membership gives you access to exclusive premium content including our regular magazine, webinars, networking events and extensive online resources focused on technical and soft skills to support your career.