ICAEW’s Corporate Finance Faculty has published a consultation on guidance for preparers of prospective financial information, with an Exposure Draft and a response statement to an earlier consultation paper. This should be of interest to anyone preparing financial forecasts or projections. Comments are invited by 30 April 2019.

Why should you read the consultation paper? 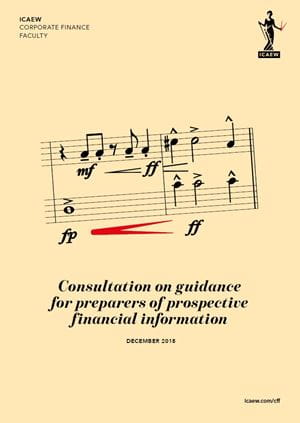 What does the Exposure Draft provide?

Who does this consultation paper affect?

“The proposed new guidance is of relevance to anyone preparing, reviewing, or advising on financial forecasts or projections, of virtually any kind and for almost all purposes - from formal finance-raising documents to business planning in a private company.” David Petrie, Head of Corporate Finance, ICAEW.

There is an upward trend for business reporting that relies on PFI. Those who will benefit from the proposed framework include:

Tell us your thoughts

ICAEW would like to hear from all those with an interest in the preparation framework. Details for responding are included in the consultation paper and we would also welcome feedback through roundtables or in meetings. Contact katerina.joannou@icaew.com or +44 (0)20 7920 8806.

ICAEW intends that, when finalised, the new guidance will be published as an ICAEW Technical Release replacing guidance Prospective Financial Information: Guidance for UK Directors, which was published in 2003 (the 2003 guidance).

Prior to publishing the Exposure Draft, ICAEW conducted an extensive pre-consultation of market participants to establish the need for and scope of updated guidance. That exercise formed the basis of the proposals in Consultation paper on prospective financial information, which was published in 2017 (the 2017 consultation).

Responses to the 2017 consultation were taken into account in the development of the Exposure Draft. In section 5, Consultation on guidance for preparers of prospective financial information contains a summary of the responses and explains how they have been addressed.

We received the following non-confidential responses to the 2017 consultation: