ICAEW’s Tax Faculty works to support its members and financial professionals on the latest developments in tax policy and practice. Here you can see list of the faculty’s latest activities, publications and webinars.

Find out about Tax Faculty activity in December 2020.

Impact of the coronavirus pandemic

COVID-19 and the self-assessment filing deadline

In December 2020, The Tax Faculty continued to engage with HMRC (and liaise with other professional bodies) on the impact of COVID-19 on the ability of taxpayers and agents to meet the 31 January 2021 deadline for filing 2019/20 self-assessment returns and for paying income tax.

On 18 December, HMRC responded to our letter on the subject, saying that there will be no general easement on penalties but offering some reassurance on reasonable excuse, particularly for agent related filing delays. The faculty continues to press HMRC to review their position in the light of the latest developments.

The Tax Faculty continued to engage with HMRC on the COVID-19 grant schemes CJRS and SEISS, particularly on the shorter deadline for CJRS claims, the proposed publication of details of CJRS claims made and the new eligibility criteria for claiming the third SEISS grant.

At the end of November it published TAXguide 17/20 CJRS - the furlough scheme reinvented, which provided answers to questions posed by attendees to a faculty webinar explaining the latest changes.

It continues to seek clarification from HMRC about the interaction between CJRS NIC element and employment allowance, and the extent of the cycle-to-work easement announced on 17 December.

The Tax Faculty held the second meeting of its newly formed MTD for ITSA working party. Discussion focussed on the draft Regulations, questions we should be asking HMRC now, the forthcoming HMRC IT release, how income tax payment estimates might work, nudges and prompts, and how members would be approaching the pilot.

Anita Monteith and Caroline Miskin attended meetings with HMRC on MTD. The main topics covered were the draft MTD for ITSA regulations which HMRC is intending to lay in early 2021, the further extension of MTD to all VAT registered businesses and the consultation on extending MTD to corporation tax.

DAC 6 and OECD Pillars One and Two

On 15 December, in association with BDO, the faculty published an article 'Red Flags to navigate DAC 6 hallmarks'.

It also liaised with the CIOT and met with them and HMRC to discuss the impact of the disclosure rules on members of professional bodies overseas.

On 31 December, in light of the free trade agreement negotiated between the UK and the EU, major changes were announced to DAC 6 which will simplify considerably the reporting requirements within the UK.

On 14 December the faculty responded to the OECD’s consultation on its latest proposals for a worldwide co-ordinated approach to taxing the digital economy (known as its Pillar One and Pillar Two proposals). This was published as ICAEW REP 113/20

A webinar planned for 15 December was deferred until 19 January and has been renamed 'The UK and DAC 6 post-Brexit - where do we go from here?'. It will be presented by Jo Myers and Ariana Kosyan from EY.

On 9 December HM Treasury published a consultation on VAT and the sharing economy and ICAEW's Tax Faculty has requested views and comments from members to inform its response.

On the same day, Neil Warren presented a webinar: VAT tips for your SME clients.

Working with HMRC and government

On 15 December, ICAEW's Tax Faculty and members of the Representative Bodies Steering Group attended a roundtable meeting with the Minister, Jesse Norman, on the proposed next steps on raising standards in the tax advice market and tackling promoters.

HMRC propose to publish a consultation document in early 2021 on a proposal that a person providing tax services must hold professional indemnity insurance.

On 12 November HMRC published draft Finance Bill 2021 legislation which takes into account some of ICAEW's recommendations made in ICAEW REP 57/20 in response to HMRC's on its plans to tackle abuse of the construction industry scheme.

Representatives from ICAEW's Tax Faculty attended the following meetings and discussions with HMRC:

Tax Faculty Board and Committee meetings

In this issue: why cooperation and planning are fundamental when dealing with fixture sales and how Brexit will affect the taxation of French holiday homes. 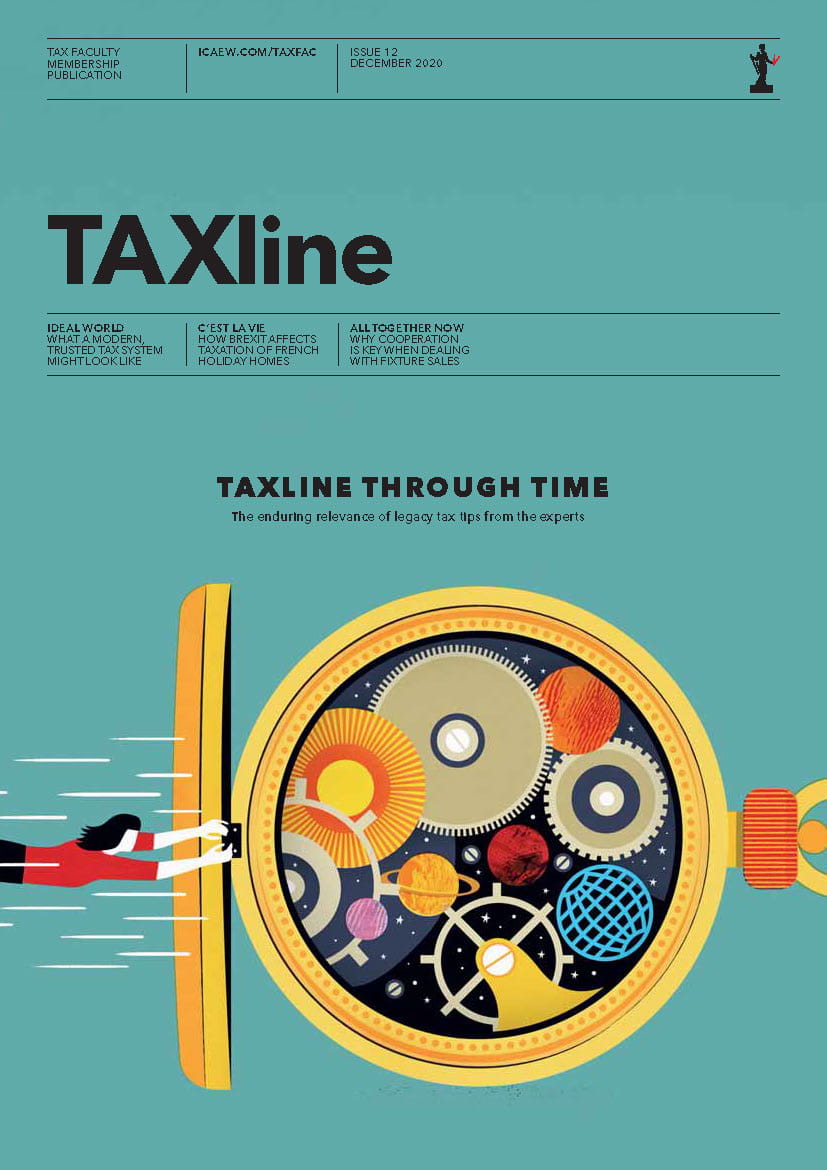