How do you tax a robot?

The Tax Faculty's technical lead, Anita Monteith, looks at the tax challenges brought by the increasing use of artificial intelligence and 'bots. 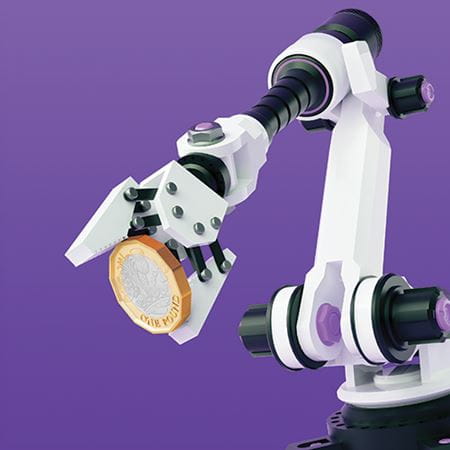 Tax and IT are becoming inextricably linked, which became clear first with the development of inline extensible business reporting language (iXBRL) and more recently with Making Tax Digital (MTD). Now, inevitably, the use of technology itself is now under the tax spotlight.

Last year I wrote of my concern for our shrinking tax base. Considering the pie charts published in the Budget Red Book each year, I expressed my concern that we rely very heavily on tax raised through income tax and national insurance contributions (NIC) to help fund the considerable amount spent every year to keep the UK afloat.

NIC alone represents just over 17% of our annual income and we still run an annual net deficit so we can’t afford to lose any of our income. Back then I observed that as we moved to a gig rather than employment-based economy, our tax receipts would inevitably fall, just as our spending is going to increase as we pay out more in pensions and on the NHS.

I now have a new worry, which it seems is shared. If work is being done by robots rather than people, should we be taxing them too? Bill Gates seems to think so, and in a recent interview with digital news website Quartz he suggests that a robot tax could finance jobs for people to care for the elderly or to work in schools.

Never mind employment patterns changing, the existence of human work itself seems to be under threat and more and more of our jobs are already being performed by robots. At least that is what the headlines tell us.

This needs closer inspection and then, possibly, action.

What is a robot?

What exactly do we mean by a robot? Artificial intelligence comes in many shapes and sizes.

Clearly Betty wasn’t going to replace a real person (yet), but the robot moved around and kept tabs on which staff were in the office, checked that fire doors were closed and desktops were clear and was able to greet guests at reception. So not quite the human touch, but as it glided around the office, it was the sort of robot we might recognise as a person.

However, robotics extends far beyond Betty and robotic process automation (RPA) enables software that can be programmed to do repetitive tasks that people would have done in the past.

Many of us shop online, but give little thought to the dark warehouses from which our orders are fulfilled. These storage facilities literally have no need for lighting for normal operation. Depending on the type and size of goods being handled these warehouses are often highly automated and use robots to pick and pack orders.

No people, no salaries, no tax. In return we get error-free orders, real-time stock control, and the ability to track goods electronically from point of origin, through shipping, haulage and across international borders; the post-Brexit dream environment for international movement and identification of goods.

So robots come in different shapes and sizes and usually bear no resemblance to those we see in sci-fi movies.

Are there options for taxing robots?

Years ago we had typing pools, but they disappeared as we found desktop computers more efficient. We learnt to type, slowly, even though we were accountants, and using word processing tools were able gradually to increase productivity, producing our own reports with little assistance.

This happened at a pace which allowed the previous occupants of the typing pool to learn different skills, so didn’t lead to mass unemployment. Now, however, the worry is that computers are replacing human workers in many more complex tasks much more quickly than we can find new work. With fewer people earning, less income tax and NIC will be collected. How can this be replaced?

Some will find new ways to earn a living. We no longer have typing pools, but we have plenty of personal trainers and nail technicians. It is said that many of today’s children will take jobs which have not yet been invented.

But what if developing new forms of work for humans develops at a much slower pace than technology, and automation puts too many people out of work? The tax gap will need to be filled by something else.

The notion of a PAYE system taxing a series of Betty-type robots is distinctly weird, and if that was the proposal it would take little imagination to design a computer that looks and acts rather less humanoid to opt out of the payroll. Stranger things have happened.

The US charges a higher import tariff for humanoid dolls than on toys. Toys include non-human types of toy dolls. In 2003, Toy Biz, the Marvel comics subsidiary, won its case to have its action figures classed as toys and not dolls because they represent non-human creatures, like Wolverine. This halved the import tariff rate.

Another approach is to reduce tax relief. In South Korea, the government has recently reduced the tax incentives given to businesses investing in automation. Companies used to have part of their corporate tax reduced by up to 7% of investment in infrastructure designed to improve productivity. This incentive will still be available until the end of 2019, but it has recently been reduced by 2%. While not being an actual direct tax on robots, it is certainly going in that direction with reduced tax relief for spending on automation.

A tax on driverless cars or delivery drones might work. The tax could be used to retrain the minicab and delivery drivers to do other work. But this then leads us to the notion of hypothecated taxes which in the past we have opposed as being impractical for a variety of reasons. (For more on current thinking on hypothecation, read Hypothecation of taxes – a cure to austerity?)

Another suggestion is to impose a greater tax on companies with high profits compared to their workforce. A high profit:people ratio would indicate companies that are highly automated. The cost of this would be for them to suffer a higher corporate tax of some sort. But do we really want to discourage such inventions, even though they replace jobs?

These are hard choices ahead.

Could we actually do it?

If we decide that a robot tax is needed, could we actually make it work and at a cost that makes it worthwhile?

In response to Bill Gates’s suggestion, the EU considered a proposal to tax robot owners to pay for the training of workers who lose their jobs because of robots, but ultimately rejected it in February 2017.

Having spent most of my tax career responding to successive governments as they attempt to solve the employed or self-employed riddle without addressing the real problem, which most will agree is the different NIC consequences of employment status, I rather dread having to spend the rest of it arguing over whether something is a robot or not.

As an institute representing a broad range of interests, we would, of course, rise to the challenge; but whether governments could find the political middle ground necessary to change the tax base so significantly is another matter. The UK could certainly not implement a robot tax on its own. To do so would risk robotics enterprises relocating to a county without such a tax, and driving innovation abroad would not make sense.

We are at the dawn of a new digitalised accounting age, one which will be needed to make tax digital. It is only a couple of years since the finance system at AstraZeneca underwent a huge exercise to streamline its global reconciliation process, doing away with many manual processes and spreadsheets previously relied on to manage its (in 2014) $58bn balance sheet.

It states that it has saved $2.5m through productivity improvements and time saved. Natalie Childs, Global Process Owner, AstraZeneca, cites one of the benefits of automating the process as bringing a better work/life balance.

Never mind the tax charge, more time for fun does have its attractions. Better bring on the taxbots.