Every year, our students write to tell us about the difference our bursaries make to their lives. You can read their stories here.

ICAEW Foundation has two bursary programmes with Manchester University, including the Geoffrey Beckingham FCA set of bursaries kindly sponsored by his family in his memory. These reports outline the impact of these bursaries on the recipient students.

Isaac Farrell let us know that the ICAEW was even more helpful during his second year of accountancy and finance studies at Lancaster:

The step up from first to second year is huge with a greater workload and harder concepts to cover. Fortunately, the bursary has subsidised my living costs, allowing me to spend my spare time studying and not working a part time job. Also, the price of textbooks really adds up, especially with eight different modules, so the bursary has supported me with that as well.

Similar to last year, I have saved a proportion of the bursary to use on growth outside of my degree. This time around I will be spending it on a laptop. I think it's going to be really important for me to spend the next year getting comfortable with a whole host of computer software before I enter the world of work and having my own personal laptop will really help with this. Using the laptop, I am going to take advantage of the Digital Skills and Microsoft Office courses available on the Lancaster student portal. These courses will leave me with qualifications to add to my CV and will also prepare me for work after I graduate.

As I prepare for my final year at Lancaster, it's great to know that I won't be worrying about the financial side of being a student. Instead, I will be able to focus on my course and getting the most out of it, as well as spending any spare time applying for post graduate jobs! 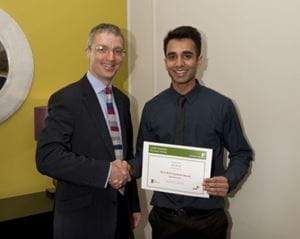 Ali was awarded the ICAEW Foundation Bursary supported by PwC for his studies at Leeds Business School, Leeds University in 2012. Receiving the bursary has helped raise Ali’s profile and has opened up several opportunities for him. He secured a place on PwC’s Talent Academy, a summer event which took place over three days and can fast track a student to a placement ahead of other students. The financial security offered by the bursary also allowed Ali to travel, something he would not have otherwise been able to do.

Ali has accepted a placement at Ernst & Young’s London office for the final year of his course.

Securing a bursary from the ICAEW Foundation Bursary Programme in 2012 has provided Sayeed with financial support and peace of mind throughout his studies at CASS Business School.

The Bursary also acts as an incentive, ensuring he performs consistently well throughout his degree. Sayeed sets himself minimum academic requirements each year in order receive continuous support throughout his three-year undergraduate degree programme. 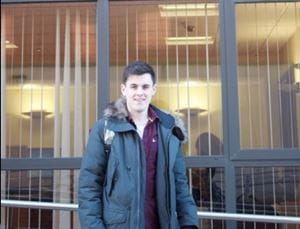 Will was awarded the ICAEW Foundation Bursary supported by PwC in his first year at Cardiff University in 2012. He has now completed two years at university and is finding himself in a much safer financial position due to the bursary he receives. Receiving the bursary has given Will financial peace of mind which has allowed him to participate fully in university life.

Giedre Balciute, BSc Finance Accounting and Management student at Nottingham University received the University’s prize for best performance on the first year of the programme.

‘Being chosen by ICAEW Foundation gave me an incentive to work hard and try my best to not let my bursary givers down. Consequently, I set myself high academic goals and worked towards them. The ICAEW Foundation bursary has helped me a lot in my first year. It allowed me to support my studies without having to take on a part time job and to concentrate on my study as well as participate fully in university life’. 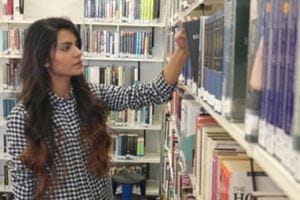 Rubab has completed the second year of her BA (Econ) Accounting and Finance course at Manchester Business School. Receiving the ICAEW Foundation bursary, supported by PwC has been a huge help; it has allowed Rubab to support her studies without having to take on a part time job and to concentrate on her studies and excel in what she’s doing without any financial strains.

Rubab was given the opportunity to participate in the PwC Talent Academy, which was a very helpful experience for her first year and for opportunities in the future. The bursary has opened a lot of doors; prospects of internships and other connections which would not have been possible otherwise. 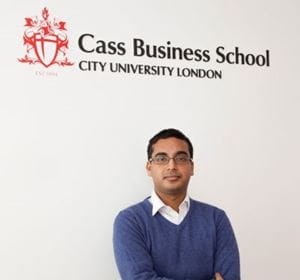 Having worked in the retail sector and done voluntary work for charity, Shahryor wanted to do a degree to gain professional development. A few months in he considers the course is giving him the opportunity to improve his communication, leadership and team working skills. As well as meeting new people he sees a lot of doors opening to new opportunities.

The ICAEW bursary helped make the decision to go to university much easier for Shahryor. He is able to concentrate more on his degree and less on having to work extensively part-time to make ends meet.  He feels that without the financial strain impacting on him and his family that he will have better peace of mind and hopefully can achieve the best grades possible.

Cyrill Abbey studied to become a chartered accountant with the Institute of Chartered Accountants in Ghana (ICAG) via evening and weekend classes at the same time as completing his fourth year in BSc Administration at the University of Ghana Business School.

Although more than willing to put in the hours of study, he remembers that the financial implications of taking the ICAG course seemed hard to overcome at first. Securing a bursary from the ICAEW Foundation lifted the financial burden and enabled him to focus on learning and achieving the best results possible.

Cyrill graduated from university in 2018, and completed the ICAG qualification in the November of that year. He says that becoming a chartered accountant has opened up a career path with brilliant prospects.

Komla Atsu Tachie applied for the ICAEW Foundation bursary in May 2018. Without it, he may have had to defer his application for full membership status with ICAG. As it was, the money he received helped towards transport and other costs associated with attending the course, a journey of six to seven hours from his home.

Komla believes that his professional accountancy qualification has also opened the door to future possibilities that would otherwise have been closed. While his year studying with ICAG was challenging, having the financial support from the ICAEW Foundation made it possible, and he will always be grateful for that.

Lee Shing Hei was awarded the ICAEW Foundation bursary in 2012 to study Professional Accountancy at the Chinese University of Hong Kong.

During his first summer holiday at university Lee Shing Hei participated in various activities and sports, and has made new friends. He also took on a 6-week internship at the Hong Kong Dragon Airlines. This was an invaluable experience which helped Lee Shing Hei determine his career objective.

Securing the bursary has allowed Lee Shing Hei to experience a more diverse and meaningful university life and has given him the opportunity to broaden his horizons.

Li Fu Wai was awarded the ICAEW Foundation bursary in 2012 to study Professional Accountancy at the Chinese University of Hong Kong.

Li Fu Wai has been involved in many activities and was elected as chairperson to organise a yearly event at the university which had a huge attendance. He is also involved in various student societies which have given him insight into how the university works from an administration level. Li Fu Wai’s contribution has led to him being chosen as one of the exchange students with Beijing University, an experience he is very much looking forward to as it will help determine the options for his future career path in the professional accounting industry.

Securing the bursary has allowed Li Fu Wai to spend more time on university activities to broaden his horizons, without any financial worries.

To discuss how you can become involved with and support ICAEW Foundation, get in touch.