Friday 2 August 2019 - ICAEW is urging Boris Johnson’s new government to help businesses by dealing with challenges flagged up in its latest ICAEW Business Confidence Monitor™ (BCM). One of the most widespread issues found is a rising proportion of businesses which report late payment as an increasing challenge for their performance compared to a year ago.

According to the latest BCM, late payments from customers are a greater challenge than a year ago for one in five businesses (20%). Six out of nine sectors (Property, Business Services, Manufacturing & Engineering, Construction, Retail & Wholesale, and Banking, Finance & Insurance) are experiencing this as a growing issue, while nearly a quarter (24%) of SMEs are also reporting this.

Regulatory requirements and customer demand also continue to grow as rising problems, with around two fifths of businesses reporting these as increasing challenges.

“The Prime Minister has promised Brexit by 31 October and the overriding priority of his government must be to get a good deal. More than anything else that will give business the stability it is crying out for.

“However, this feedback from our members, who advise businesses in every sector and level of the economy, reminds us that they face other challenges as well, many of which have little to do with Brexit – such as late payments and the regulatory burden. Robust Government action on these issues could make a real difference to the business environment, especially for SMEs, and would help to restore confidence and momentum. That would go some way to unlocking the economy and ensuring it is in the best shape to face the challenges and opportunities of life outside the European Union.”

Other key findings from ICAEW’s BCM include:

• Business confidence is still negative
Confidence is still negative this quarter at -10.3, though higher than in Q2 2019 when it was -16.6. However, whereas in Q2 confidence trended upwards, within Q3 it has trended downwards, impacted by events such as British Steel’s insolvency and the announcement of the closure of Ford’s Bridgend plant, as well as evidence of a global slowdown and international political anxieties, particularly with regard to Iran. The downward trend has reversed gains that were seen after the extension of Article 50 in April this year, and confidence is now almost at the same level as it was in the quarter after the Brexit vote in 2016. 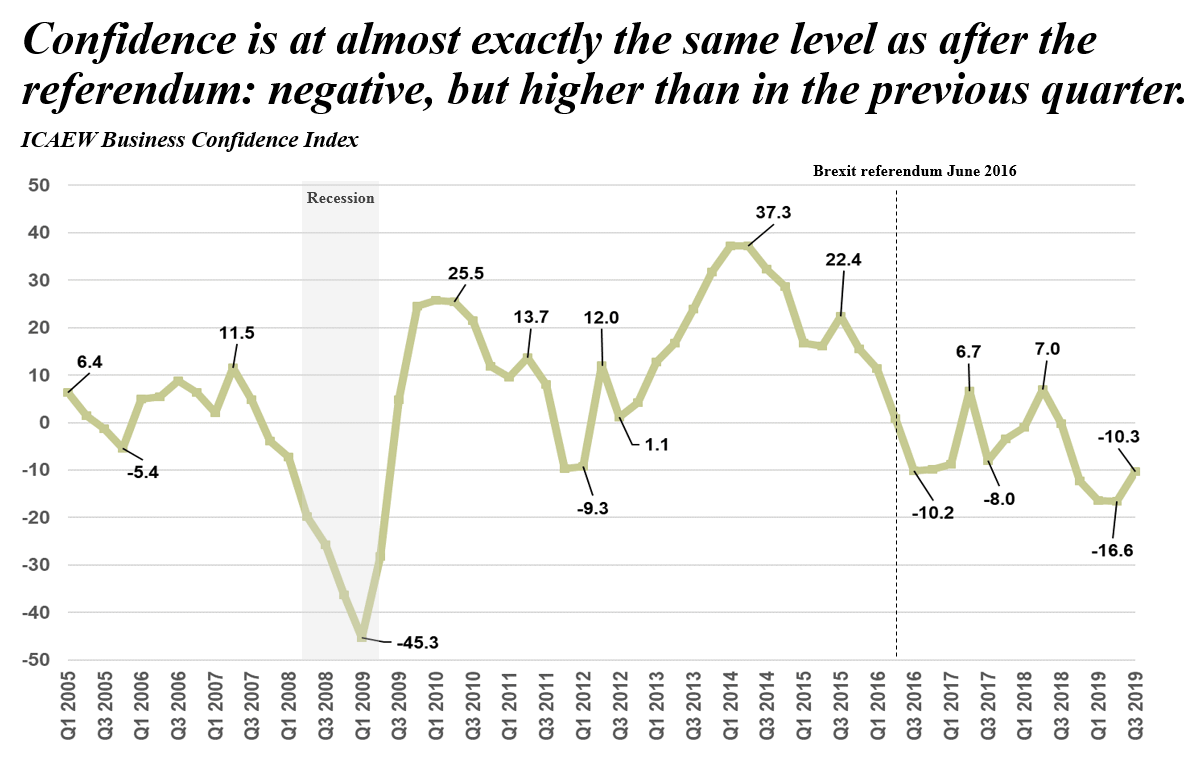 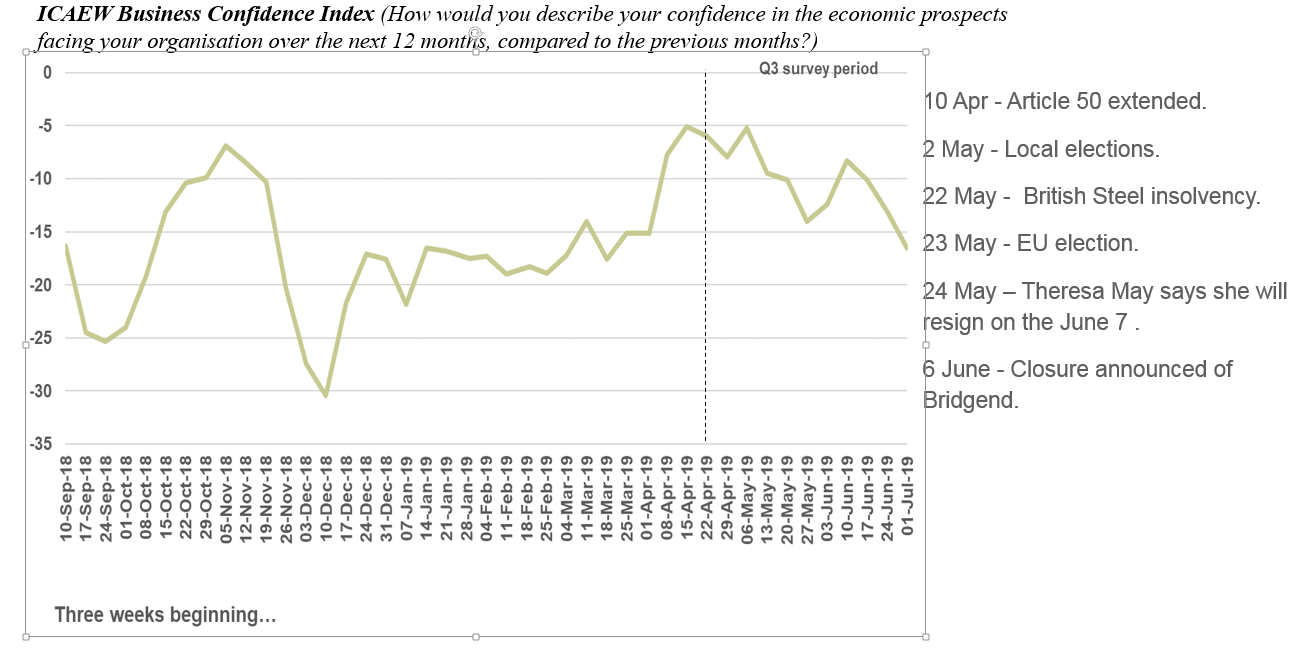 Business confidence is negative in every sector, but particularly in Retail & Wholesale, Property, and Transport & Storage. Confidence among SMEs is not as negative as of FTSE 350 and foreign-quoted companies, as larger businesses may be more exposed to external factors such as trade wars and protectionism. 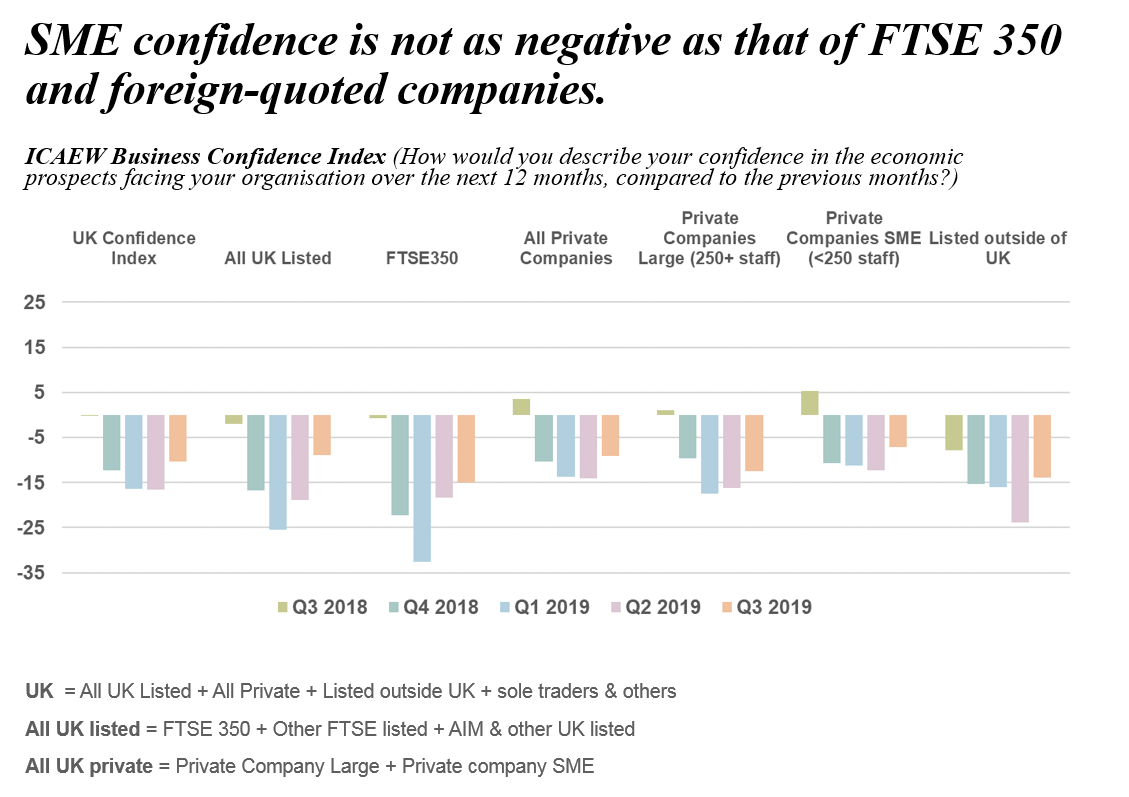 Please direct all media enquiries to: