British business confidence back in the black

3 February 2020: business confidence has returned to positive territory in the first quarter of 2020 after being at its lowest level for a decade at the end of 2019, a survey from ICAEW has shown.

The end of political deadlock, the election of a majority government and a concrete date for leaving the EU have all boosted British business confidence, according to new ICAEW research.

ICAEW’s Business Confidence Monitor for Q1 2020 found that confidence is now back in positive territory, the first time it has been positive since the third quarter of 2018. In Q4 2019, confidence was -20.6, the lowest it had been for a decade. 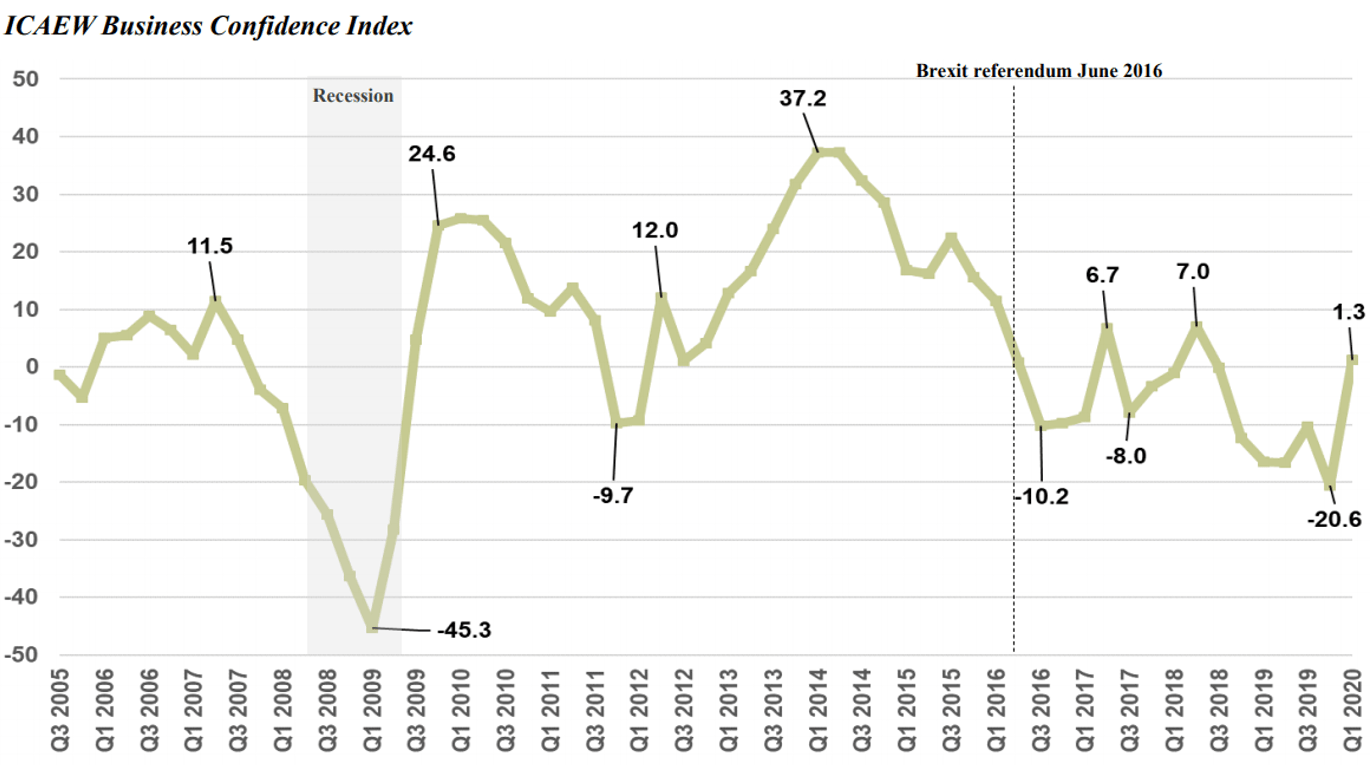 The Institute’s regular survey of 1,000 chartered accountants found that most businesses think the next 12 months will be an improvement on the past 12 months and expect slightly stronger growth.

Among the reasons for the upturn in confidence, the report cited the decisive General Election result providing greater clarity on the first stage of Brexit.

Other factors included pledges from politicians to end austerity and the promise of increased government investment.

In spite of the positive mood surrounding British business, the report also warned that the underlying economic position remains challenging for UK firms.

Many businesses responding to the survey remained cautious about how much they will invest in their businesses over the next few months.

Only 39% of companies said productivity had increased during the previous year, a factor the report linked to continued low investment growth.

Concerns over regulations remain the most commonly cited challenge and will be a factor for businesses to consider during the UK’s trade negotiations this year.

The issue of skills shortages also remained on the agenda for many businesses. Almost a quarter (23%) stated that the availability of non-management skills has become a greater challenge to their organisation’s performance compared to the last 12 months.

Commenting on the survey, ICAEW Chief Executive Michael Izza said: “Businesses are feeling more confident about the future now the political deadlock has ended. But while some uncertainties have eased, much remains unknown around future trade agreements and regulatory alignment.

“It’s essential that businesses are supported through the transition period, and we want to see the government negotiate a free trade agreement that maximises market access and avoids unnecessary bureaucracy for business.

“Creating the right environment for British businesses to prosper long-term means boosting skills, fixing late payments and improving access to capital. The new majority government has indicated that it will use the Budget next month to boost investment and level up regional inequalities. We hope this includes pro-business measures such as tax grants and plans to increase productivity, so we can look beyond Brexit to critical domestic issues.”

Possible reasons for this include the political pledges on infrastructure investment and fears around nationalisation of public services easing with the election of a Conservative government.

Stock levels also settled back towards normal as anxieties around a no-deal Brexit eased.