8 June: Call waiting times on HMRC support lines were up 25% in the first quarter of the year as data reveals that customer service performance had fallen before lockdown. 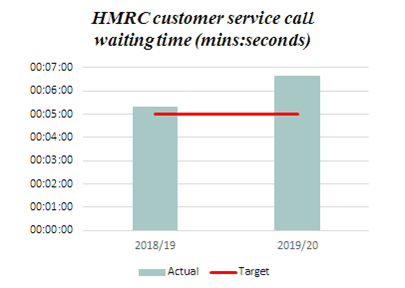 HMRC’s latest customer service performance statistics confirm that the average call waiting time in the first quarter of 2020 was more than six minutes, a full minute and a half longer than in the lastthree months of 2019.

They also reveal that just 74% of post was handled within 15 working days, down from 83% in the previous quarter, and that 27% of callers waited more than 10 minutes for their call to be answered.

The performance for 2019/20 as a whole will be confirmed in HMRC’s annual report, but the provisional figures show that HMRC did not meet a number of its targets, including:

The breakdown of individual helplines’ performance shows that personal tax PAYE and self-assessment helplines were hardest hit, but confirmed that all lines had been impacted, including the agent dedicated line which is usually answered promptly. 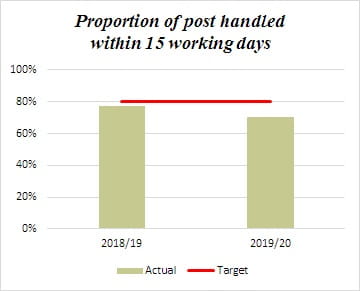 ICAEW’s Tax Faculty described the statistics as ‘disappointing’, particularly given they only cover the first week or so of lockdown.

“HMRC is still operating reduced hours on its helplines and, based on reports from members, we expect that the performance in the current quarter will show a further decline over the last quarter of 2019/20. However, we appreciate that HMRC is in a difficult position given the need to focus on delivering the COVID-19 government support schemes and the fact that it was not initially possible for some of the helplines to be answered by staff working from home.”

On a more positive note the number of calls being made to HMRC continues to fall as it develops its digital services. The total number of call attempts over the year dropped by more than 1m to 41.6m in 2019/20 and the calls attempts in the quarter were 9.8m, down from 11m in the same quarter in 2018/19.