The following BPM tool guide is one of a series produced for ICAEW by Professor Mike Bourne of Cranfield University.

KPIs are used to track the performance of an organisation and are widely used in the UK and USA. They are supposed to reflect “Key” indicators that are important to the company or organisation being measured. In reality, many organisations have a significant number of KPIs, so there is some debate about how “key” they are.

The “I” refers to “indicator”. I stress this point because KPIs are an indicator of performance and not real performance itself. This may seem an academic point, but it is a really important issue. People respond to KPIs.

Research and experience shows that people focus on improving the indicator not real performance. This is because the KPI is the number that everyone sees, reports and talks about. The result is that the indicator increases whilst the performance of the organisation does not.

To put KPIs in context, they need to fall into the following structure (See figure 1). 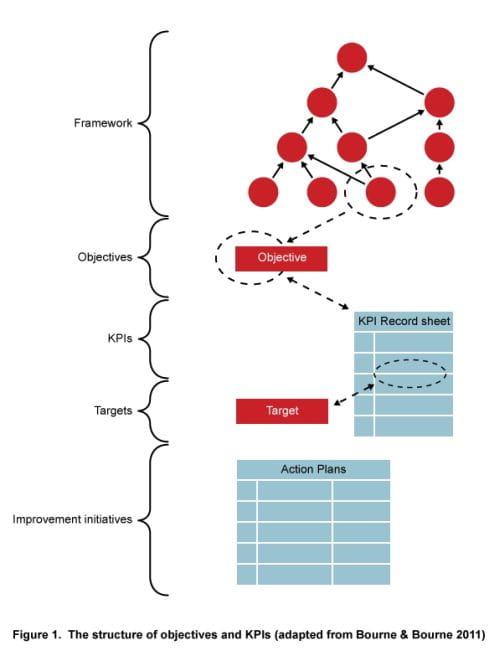 Most people are aware that GE (General Electric) used non-financial measures as early as the 1950s but in France, the Tableau de Bord (which captures the strategy of an enterprise in a set of performance indicators) has been around from the early years of the last century.

More recently, KPIs have been developed in an attempt to move away from purely financial measures of performance. Financial measures are supposed to be the outcome of everything else that happens in managing the business, so it has become important to measure non-financial activity and hence our fixation with KPIs.

The performance measure record sheet (see figure 2) is a useful framework to help you create appropriate KPIs. The framework asks a series of questions to help guide your KPI development.

Benefits of having KPIs

There are a number of benefits that can arise from having a set of KPIs:

Issues and pitfalls to be avoided

There are a number of issues to be aware of when developing and using KPIs: