Energy transition: from baby steps to a sprint

Across the globe organisations are setting ambitious targets for carbon reduction. But how does an energy company translate those targets into action? Hong Kong’s CLP Group knows exactly what pathway it is on.

The CLP Group is an Asia Pacific-focused investor-owned power business with investments in Hong Kong, Mainland China, India, Southeast Asia, Taiwan and Australia. The group’s assets span energy retail, transmission and distribution, power generation, energy storage portfolio and smart energy services. Nicholas Allen is an Independent Non-executive Director of CLP Holdings and an ICAEW Fellow, as well as a Member of The Hong Kong Institute of Certified Public Accountants. He says the company first took baby steps along a carbon reduction pathway more than a decade ago with the release in 2007 of Climate Vision 2050.

“If you went back to the beginning, the pathway to energy transition was probably developed somewhat separately from what the business was doing at the time. It was an aspiration. It probably had a milestone that was carbon capture and we assumed you could carry on doing what you were doing and that would still be OK,” says Allen. “It wasn’t, and so that pathway went, but it was perfectly valid thinking at the time.”

He says the pathway for CLP – in keeping with many energy companies – has transitioned out of a carbon creation/capture strategy, made a shift away from coal to gas, and moved towards hydrogen, nuclear and renewables.

But CLP’s energy transition journey is specific to the environment in which it operates. “A large part of our business is in Hong Kong [CLP supplies 80% of Hong Kong’s power needs], where we are based, and Hong Kong is a very small place,” says Allen. “Its renewable opportunities are fairly limited, particularly onshore, but there is some opportunity offshore.”

However, he concedes the biggest slice of CLP’s Hong Kong carbon-neutral energy generation has been nuclear. “We have interests in nuclear plants adjacent to Hong Kong across the border in China. From one of them, we have a direct transmission line into Hong Kong and that currently brings about a third of our electricity fuel mix to Hong Kong and is zero carbon,” says Allen. “I know that nuclear is a subject of debate but in Hong Kong, you won't get to zero carbon from renewables. So, the journey to carbon neutrality is around a combination of nuclear and properly imported renewables.”

He moves on to CLP’s activities in Australia – quite a contrast from the Hong Kong market. “In Hong Kong, we have a model which is vertically integrated. We generate electricity, we transmit it and we sell it to retailers – and we have a contract with the government to do so, which is renewed every 10 to 15 years. We have an incentive in Hong Kong to continue to invest in the grid and transmission,” says Allen. “If you look at Australia, it’s a much more decentralised model, whereby the government seeks to introduce more competition into the market by mandating a central grid operator and separating the generation from the retail businesses and having a lot more players in the market.”

He says that different countries with different models and different geographies will dictate how local markets transition and energy companies and governments invest. “The ability of communities, countries and societies to invest in their infrastructure is going to be critical,” he says. “What you see in the UK is a great deal of renewables, whether it's wind or solar, being connected to the grid and displacing fossil fuels, which is very beneficial. But the grid was never really built for that type of operation. It was built for baseload energy to be put into the grid by a relatively small number of generators. And then for energy to be taken out by households.”

He points out that a challenge of the Australian market is the large penetration of rooftop solar, with households selling their excess energy into the grid which they take out when needed. “But the grid was not built for that many people putting energy in and taking it out. Also, grids tend to run on frequencies – about 50 Hertz – and so do power stations. When you take power stations off the grid, they become unstable because they're not operating at the right frequency,” says Allen.

For Allen, the challenge is as much about infrastructure investment as it is about the fuel mix – and getting the infrastructure investment right will depend on governments getting the risk/reward profile right to attract private investors. In terms of CLP’s own asset portfolio, Allen says that in Hong Kong, CLP owns gas-fired plants and also some older coal-fired plants that will be gradually phased out. It has a 25% interest in a nuclear plant in China that supplies Hong Kong. In Australia, CLP’s subsidiary EnergyAustralia owns plants fired by gas, coal and renewables, including wind.

“If your ultimate ambition is to get to zero carbon, then just moving from coal to gas doesn't get you to zero. It gets you to gas and that's much better from where you are today. I'm with that group of thinkers that say this is an important intermediate step because grids will suffer and struggle to manage a complete movement to renewables,” says Allen. “The criterion we adopt in Hong Kong is reliability.” But, returning to the carbon capture pathway of previous energy transition thinking, Allen notes that the new milestone is hydrogen, albeit that the carbon challenge of creating hydrogen is very much the elephant in the room. “Certainly, in our part of the world, people do look to hydrogen as a pathway to lower carbon emissions,” says Allen, adding that government policy sets the pathway agenda.

“Government policy is absolutely critical. At a very basic level, when you're spending money on infrastructure you're expecting to earn a return over 30 or 40 years. If you build a grid, if you build a transmission system, if you build a battery farm, whatever it is, it will be a long-term investment. And if you can't be comfortable that government policy is going to be consistent during that investment period, then any energy provider would be reluctant to spend,” says Allen.

He points out that in Australia companies that went to the market early 10 years ago and built wind and solar farms are finding they're now not viable because government policy has moved on, and the original technology under which they were built with all the right intentions does not compete with new farms.

So, what ultimately incentivises an energy provider to invest? Is it just because it is a pathway towards zero carbon or is it also because failure to invest renders you uninvestable and uninsurable? “The pressure from investors and other stakeholders along this journey has grown over the last few years. I expect it to accelerate in the run-up to COP26, particularly for corporates,” says Allen. “I don't think you could get a new coal-fired plant built pretty much anywhere at the moment. You might do it in China, India or other developing countries, but you wouldn't get banks to finance it,” he says.

Returning to CLP, Allen says: “We want to make sure as a utility that we have a broad shareholder base. We recognise that we need to be a viable long-term business and, to be that there has to be this type of transition.” He reminds us that Hong Kong, like the UK, has committed to be carbon neutral by 2050, so given that 80% of Hong Kong’s electricity is supplied by CLP, the energy provider has to be synched with government.

But that being said, Allen is not in the camp that says the profit motive is dead. “We now have multiple objectives for different stakeholders. I'm of the view that to be sustainable means you have to be profitable in the long term and that you'll be making decisions in the near-term that may not be near-term optimal for profitability but are optimal for long-term profit.”

For Allen, the big change in recent years is that power companies are actually doing what they are saying. “If you look back 15-20, years, there was a clear divide between what people said they would do about climate change and carbon emissions, and what their business strategy was. Now the strategy and sustainability are very much interwoven. They have to coexist. So, decisions that we make about investments today, have to be consistent with the pathway that we're working on to 2025, 2035 and 2050. I'm a believer in the profit motive being quite powerful. And you have to manage that if you want the whole of society to move in the right direction.”

A plethora of financial, climate, health, societal and business issues have resulted in significant challenges for economies globally. Pressure on public finances, and the need for simultaneous levelling up, will be immense – while private investment must be more enlightened. Where does infrastructure investment fit into recovery? 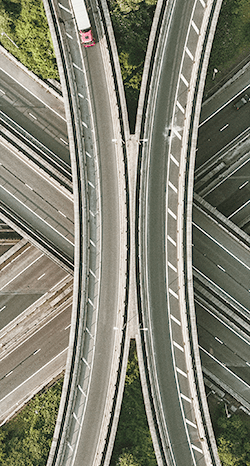