Paul Aplin, immediate past President of ICAEW, examines the future-proofing measures being taken by HMRC and how the COVID-19 pandemic has affected the strategy. 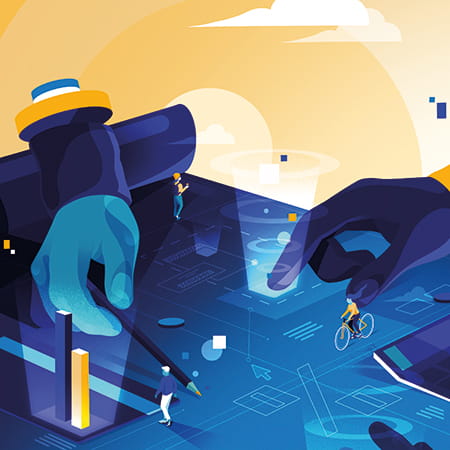 On 21 July, the government published a report, Building a trusted, modern tax administration, setting out the next steps in HMRC’s Making Tax Digital (MTD) project as part of a wider digital strategy, together with proposals for the modernisation of HMRC’s powers. To deliver the strategy, government commits to an incremental and consultative process, involving taxpayers, agents, software providers and representative bodies as well as the Office of Tax Simplification (OTS). Given the scale of the ambition, such an approach will be essential.

MTD – now and the future

VAT-registered businesses with turnover above the VAT threshold have been required to maintain digital records and to file their VAT returns using MTD compliant software since April 2019. Over 1.4 million businesses have registered for MTD for VAT and over six million returns have now been filed through the system.

From April 2022, MTD for VAT will be extended to all VAT-registered businesses (interestingly, HMRC says that 30% of the business within that remaining group have already registered voluntarily). MTD for income tax and national insurance will be mandatory from April 2023 for landlords and the self-employed with rent or turnover above £10,000. Inevitably this will revive the concerns expressed by trade and representative bodies – including ICAEW – as well as by committees of both houses of Parliament about the compliance burdens falling on small businesses. The transitional and ongoing costs cited in the report look low, based on my own experience. The government will consult later this year on extending MTD to corporation tax.

Coronavirus – a catalyst for change

COVID-19 has already impacted on HMRC’s digital activity and ambitions. The report rightly points out that HMRC reacted extremely quickly to design and implement the digital platform for the Coronavirus Job Retention Scheme (CJRS) and that it was able to draw on real time information (RTI). It also acknowledges that the Self-Employment Income Support Scheme (SEISS) could not be delivered quickly and securely enough to involve agents and that many businesses missed out because of the April 2019 cut-off. Had MTD quarterly reporting for income tax been in place, almost another full year’s data would have been available.

The fact that HMRC has needed to use data in ways unforeseen before the pandemic has been factored into the strategy. In his introduction, the Financial Secretary to the Treasury says: “HMRC are likely to evolve as an organisation central to our UK national resilience and crisis response, as well as discharging their traditional role as a tax authority.” This suggests that in the event of another crisis, relevant flows of information are likely to be coordinated by HMRC to maximise the effectiveness of government interventions. It also opens up the potential for creating a citizen-centric digital view of information held by different government departments and supplied by third parties.

For me, the missed opportunity with MTD to date has been the under-utilisation of the personal digital tax account, which was central to George Osborne’s vision of the death of the tax return. Pre-populating the digital tax account with as much information as possible could simplify the tax return process for significant numbers of taxpayers. Yes, it would place new reporting burdens on payers of dividends and some other sources of income, but combined with the information from MTD for landlords and the self-employed it could transform the utility of the account.

Can it be done? Well, Denmark has been pre-populating data for personal tax returns since 1988 and it is not the only country to do so. In the context of a 10-year strategy it is something to aim for and the report does so, stating an ambition to achieve smarter use of data, including “pre-population of tax returns, including with data from third parties”.

The report reiterates the core aim of MTD: to reduce errors in record keeping by using digital tools to move the process closer to real time. Many will be relieved to see the acknowledgement that bridging software has helped many businesses to comply with MTD for VAT and that there appears to be no suggestion that the opportunity to use it will be withdrawn.

One lesson that has to be drawn from some previous digital programmes is the need to put the agent at the heart of the process. Clients expect us to be able to see what they see in order to help them comply with their obligations. RTI was a case in point and the fact that employers and different parts of HMRC saw different presentations of the same core data (while agents could see nothing at all unless they were in the employer PAYE payment and liabilities private beta pilot) was a major design flaw. Had a single view been designed in from the start, many calls to HMRC’s employer helpline and much frustration could have been avoided, taking pressure off HMRC and enabling agents to give the service their clients sought.

This was picked up in the Real Time Information Programme – Post Implementation Review and the next steps in MTD must see agents’ needs ‘designed in’ from the start. The report commits to exactly this, “working towards HMRC’s vision for agents to be able to see and do what their clients can and designing in agent access from the outset”. Doing so will require a substantial amount of complex integration work, but that is unavoidable.

The disruption caused by COVID-19 has prompted many agents and businesses to review their approach to digital technology. Video calls have become routine and the advantages of using cloud-based software have become very clear. As we move into the next phase of MTD and HMRC’s wider digital strategy, the need for professional bodies, businesses, HMRC and software suppliers to work together will be paramount: we must move away from tax information being the main driver of change and ensure that all stakeholders, especially smaller businesses, gain – and perceive – tangible, real benefits from digitalisation.

The report says that HMRC has been looking at the experience of overseas tax authorities. The ICAEW Tech Faculty report Digitalisation of Tax: International Perspectives reviews the experience of twelve countries and covers a number of initiatives the UK should certainly look at, such as e-invoicing (and of course pre-population).

Turning to powers, the government says that the UK’s tax administration framework consists of a patchwork of rules and obligations, parts of which are over 50 years old and “not designed to facilitate a 21st-century tax system”. The aspiration is to create a simpler, more transparent framework that helps to build greater trust and provide greater certainty for taxpayers. The commitment is to reform that proceeds “steadily, incrementally and wherever possible with the support and engagement of stakeholders”.

Broad engagement is essential. The work will draw on lessons learned from the evaluation of powers introduced since 2012. There will also be a review of tax payment dates. I hope that one further thing will be factored in: the need for HMRC to have adequate resource to use its existing powers as well as any future ones.

The document sets out a vision that goes beyond the core elements of MTD, taking on board lessons from the COVID-19 pandemic and the uncertain, fast-changing, and increasingly digitally connected world in which we live. I believe that the aims are deliverable as long as there is genuine, early and open consultation on every element and phase.

Paul Aplin, immediate past President, ICAEW, and member of the Tax Faculty Board