Not all jurisdictions offer companies the breathing space in which to restructure while keeping creditors at bay. In Hong Kong, for example, although recommended by the Law Reform Commission back in 1996, the introduction of a corporate rescue procedure called “provisional supervision” is still in the making.

Under administration in the UK – or Chapter 11 in the US – restructuring can take place with a moratorium on legal action. However, such mechanisms are currently out of reach in Hong Kong. Despite several promising first steps, they remain elusive, says Johnson Kong, Managing Director at BDO Hong Kong, an ICAEW Fellow and the Immediate Past President of the Hong Kong Institute of Certified Public Accountants (HKICPA).

Kong specialises in forensic and litigation support, restructuring and insolvency-related services. He joined BDO in 1989 when it provided only traditional services, such as bookkeeping, audit and tax – nothing advisory. In the early 1990s, a time of some spectacular corporate collapses, a decision was taken by BDO to take its first steps into corporate insolvency and for Kong to lead that effort.

At that time, he says, it was a tough environment. “In the old days, the banks just pulled the plug. They liquidated the company, rather than considered a restructuring. There has been a change in attitude since then, albeit that Hong Kong still does not have a formal corporate rescue regime,” says Kong. Today, Hong Kong companies experiencing financial distress are still not offered a moratorium period, despite the 1997 Asian financial crisis, the 2008 global financial crisis and all the corporate turbulence since then.

Kong has acted as the appointment taker for more than 400 insolvency cases over the last 25 years. One of these liquidations involved not only a Hong Kong-listed group but also a series of Mainland Chinese joint ventures with eight Chinese provinces, the telecommunications sector and the Chinese military – which provided the required bandwidth for telecommunications installations in China.

When the business fell into distress, there was no straightforward way to unpick the investment vehicle that had been declared unlawful, and therefore compensation became payable. The compensation itself was the asset that needed to be extracted from the distressed company for the benefit of the creditors. This was Kong’s challenge.

Extreme circumstances call for innovative thinking. “I packaged that claim into something which was saleable,” says Kong. “And then I put it out to tender.” He continues: “I would not have got anywhere with that claim but selling it made sense.” With some of the value in the business realised – albeit substantively less than desired – there was finally a solution to winding up this very convoluted cross-border arrangement.

But it is not just cross-border arrangements that have resulted in extreme measures in Kong’s experience. For example, says Kong, probably the largest Hong Kong restaurant group – comprising some 25 restaurants and around 2,500 employees – was forced into liquidation because just a small number of restaurants in the group failed.

“One of the main reasons the entire group had to be wound up was because there was a problem with the structure of the group. Normally you would expect there would be one limited company for each restaurant so if one restaurant does not do well, then you liquidate that company and you only close down one restaurant,” says Kong. “But the structure was set up in a way that one holding company held almost all the restaurants.”

It did not help that rents in Hong Kong are high and a failing restaurant would naturally find it difficult to fund the remainder of the lease, and there was significant severance pay due to a team of loyal staff with a significant number of years’ service under their belts.

“This was probably the largest single insolvency case in Hong Kong, in terms of staff numbers,” says Kong. “About 2,500 employees were affected. That single insolvency was so huge that it nearly emptied the Hong Kong Government’s Protection of Wages on Insolvency Fund.”

The result was that the entire group was put into creditors’ voluntary liquidation. There were no tools available to Kong to protect the rest of the restaurant chain from the impact of the failure of a single branch and so insolvency was inevitable, in spite of Kong’s ability to innovate.

“We have had a difficult period for the last few years in Hong Kong,” continues Kong. “We started off with social unrest in 2019 and then followed the pandemic. This has resulted in a lot of small insolvencies. If you walk along the main streets in Hong Kong, you can see that quite a lot of shops are empty,” says Kong.

“We haven't had many large insolvencies yet, as the larger groups have the resources to tide them over a longer period of time, but this will come to an end if the current predicament persists.”

“Although I understand the Hong Kong Government is currently working hard on the provisional supervision and insolvent trading legislation,” says Kong, “we are probably going to miss the coming wave of corporate failures caused by the COVID-19 pandemic.”

Johnson Kong was the Inaugural Chair of HKICPA’s Restructuring & Insolvency Faculty and an ex-Board and Executive Committee member of INSOL. He was also a member of the Advisory Group on Modernisation of Corporate Insolvency Law to the Hong Kong Government.

Developing a global mindset is essential if you want to progress in today’s competitive business environment. Experience of working internationally is often seen as critical career experience for reaching senior management levels. Find out more on ICAEW’s Working Internationally page.

Celebrating its 10th anniversary, this year ICAEW's conference will be delivered virtually over two mornings. Hear from Hannah Gray of UK Government Investments and Dean Beale from Insolvency Service. 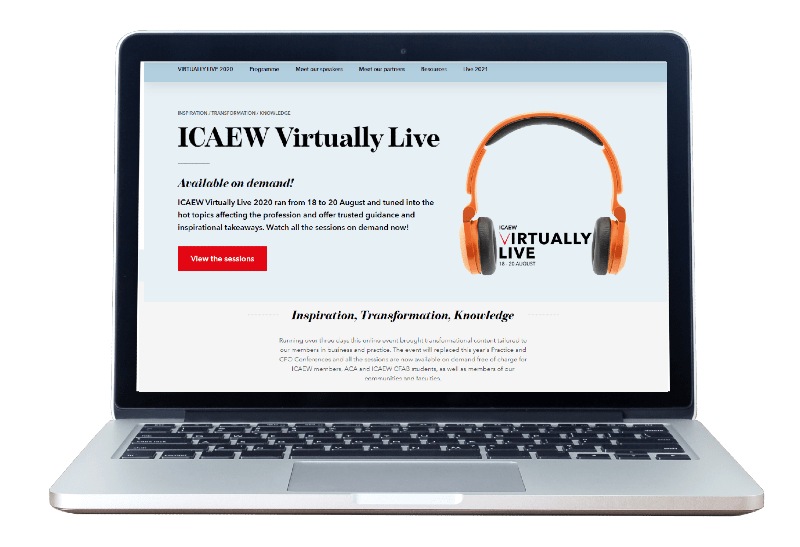