Flexible future: the pros and cons of underemployment

Underemployment has been identified as one of the top 10 risks for Europe. Sally Percy looks at its upsides and downsides in financial services. 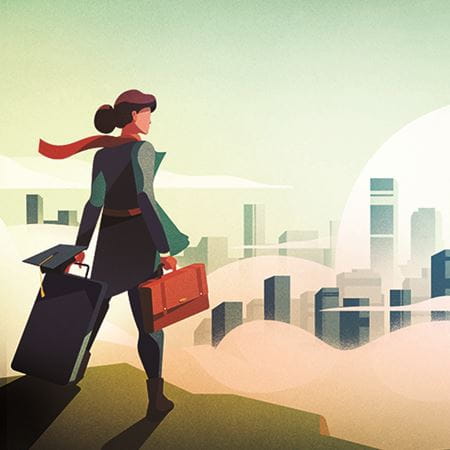 In 2017, Santander made headlines when it advertised jobs with “one-hour contracts” that guaranteed staff just a single hour of work per month.

The adverts, for on-call customer services advisers, attracted criticism from MPs at the time, but the bank maintained that its staff unions were supportive of the flexibility the contracts provided. According to Santander, the contracts gave people full employment rights with no obligation to accept additional hours or exclusivity. Since then, however, it has ceased using the contracts.

The reality is that Santander is among numerous employers that have seen the benefits of so-called underemployment. It is a growing trend across different sectors due to agile new business models emerging from the technological revolution and the growth of the gig economy. This is a labour market that is characterised by short-term contracts and freelance work as opposed to permanent jobs.

While underemployment is a trend that has been actively embraced by many people, it is not without its critics. The downsides of underemployment can include loss of basic employment rights, such as paid holidays. On top of that, roles can be poorly paid. It has become controversial because it is seen as a way to exploit vulnerable people, particularly individuals in low-paid, low-skilled roles.

In theory, underemployment occurs when a worker does not have a job that makes sufficient use of their time or skills. The term is used to cover a wide range of employment scenarios including workers who are on low- or maybe even zero-hours contracts, part-timers, contractors and freelancers. In practice, however, it can be a misnomer since some skilled professionals – IT developers, for example – may be contractors who work very long hours and earn high amounts of pay. In that situation, neither their time nor their skills are being underused. So, the issue of underemployment in the true sense of the word only arises when they are between projects.

How prevalent is the underemployment trend generally within financial services? “Part-time, zero-hour and other, similar, resources have been used for years, mainly within call centres and admin-based environments,” says Alistair Brownlee, director of specialist financial services recruitment firm BWD.

Freelancers, part-timers and people on zero-hours contracts are also filling compliance roles within wealth planning firms and insurance companies, notes Alex Russon, managing consultant – financial services, at Heat Recruitment. Often, these people are file reviewers looking to pick up contracts that fit in with their lifestyles and personal requirements, while financial services firms are eager to take advantage of the flexibility they offer.

“An increased number of companies are turning to part-timers, freelancers and zero-hour employees to maximise productivity and avoid the longer-term, expensive overheads of full-time workers,” Russon explains.

While some workers are used flexibly within financial services, as they are elsewhere, the fact that the sector is highly regulated and deals with a lot of confidential information feeds into recruitment practices. Employers can be reluctant to take on staff without the security of a formal employment contract in place.

“From our experience, there is very little underemployment in banking due to the sensitive information that employees are exposed to,” says Phil Charsley, director of recruiter Hays Financial Markets. He adds that the industry also offers fewer part-time opportunities than other sectors, but there are opportunities for women returning from maternity leave to job share in support functions.

“Underemployment generally does not occur among senior positions,” concurs Brownlee, although he has noticed increased demand for professional contract and interim roles. And there has been pressure on firms to make senior roles more flexible and adaptable.

This is not necessarily a new trend. The financial sector has a history of using contractors and consultants in certain important project-type roles. Often firms look to bring in specialist expertise from outside or additional resources to backfill positions left vacant after a key member of staff has been seconded to a project.

“The general perception of zero hours contracts seems to be that they are a way for companies to bring in low-skilled workers at minimal cost,” says Richard Harris, CEO of Okappy. “I believe the financial services sector’s driver for the use of zero-hours contracts is very different. They are used as a way to bring in more experienced people who might otherwise not be interested in working full-time, rather than as a way to cut costs.”

As it happens, Harris has first-hand experience of being on a zero-hours contract. Starting in 2004, he did two consulting roles while he was building up Okappy – one for a spin-off for a Big Four firm, and the other for a mid-tier accountancy firm. He predominantly focused on financial audit, risk analysis and strategy for the firms’ clients in the investment banking and fund management industry.

“The main advantage for me was the flexibility it provided,” Harris recalls. “I had always wanted to create my own business and it allowed me to spend time developing my idea for Okappy while earning a good income to support myself in London. I also enjoyed working across different sectors rather than doing the same job for a number of years.”

From Harris’s perspective, there was very little downside as he generally got work when he needed it. Nevertheless, he adds: “I saw colleagues worrying about the next project and being ‘on the bench’ and therefore not earning an income, especially around the financial crises of 2008.”

Harris doesn’t believe that zero-hours contracts are any more widespread today than they were a decade ago. What has changed, he says, is public perception – it was seen as a choice between “flexibility” and a “full-time job with a company and career progression within that company”.

Harris’s story is a good illustration of how people working within financial services often value the flexibility that underemployment can bring. It allows them to choose their working hours, their working environment and – often – their boss. It also enables them to build up a broader bank of experience than they might get by working for the same employer on a permanent basis.

Rise of the robots

As automation is starting to make its presence felt within financial services, this inevitably has implications for the labour market.

James Coggins, managing consultant at Hays Financial Markets, predicts that financial services employees who work in processing or other labour-intensive positions are the most at risk of underemployment due to process automation. Taking the example of onboarding processes, he says these have typically been shortened from 90 days to a month due to robotic process automation and machine learning.

Underemployment might not be extensive within financial services today, but what does the future hold? The world is changing rapidly, thanks to advances in technology. Meanwhile, the rise of the gig economy means that the future is set to be increasingly flexible. So, even if they don’t currently make much use of contractors and freelancers, the chances are that firms will be increasingly drawing on their services in the years to come.

“The concept of flexible and adaptable work is appealing to more and more employees each year,” says Russon. “So, underemployment will continue to grow as the gig economy proliferates.

However, unemployment or underemployment did not make North America’s top 10 list of concerns. This is despite a 2018 report by US job board Snag revealing that 38% of workers earning $20 or less an hour consider themselves to be underemployed.

Commenting on the report at the time of the publication, then-CEO of Snag, Peter Harrison, said: “Hourly jobs account for nearly 60% of the American workforce and 94% of net new job growth is hourly. People need to wake up. Underemployment is a big problem. It's deceiving. Most see unemployment hovering around 4% as a signal that Americans are well-employed and thriving, but this is simply not the case.”

In its report, the WEF acknowledged that the unemployment and underemployment risk needs to be “cautiously interpreted” since it can “reflect quite different challenges across markets and regions, such as weak growth, talent shortages or labour-market disruptions caused by automation”. Nevertheless, it maintained that global prevalence of the risk “should ring alarm bells about the strains on our basic political and economic systems”.

Why does this matter? Because the related stress erodes trust in institutions and fans social unrest. In recent years, there has been a strong correlation between underemployment and populism, with data suggesting that unemployed people have tended to vote for non-mainstream parties, particularly populist ones. This trend is seen as a backlash against globalisation (including the transfer of jobs to offshore locations with cheaper wages) and the rise of automation, which is replacing many manual jobs.