Our exam booking system is still experiencing technical issues and is now closed to enable these to be resolved. It will reopen on Monday 20 July at 10:00am (UK time). For Certificate Level, you can access your remote invigilation exams or make or amend bookings via my.icaew.com/examsonline.

This section of the guide provides information about Technical Releases and Representations issued by the Institute of Chartered Accountants in England & Wales and explains how you can find the full text of a Technical Release.

What are Technical Releases?

Throughout its existence ICAEW has provided guidance to members on issues of importance and given the considered response of the institute on consultation papers, legislation and exposure drafts from government, accounting standard setters and a variety of professional bodies.

Technical Releases were also issued on behalf of the Accountants Joint Parliamentary Committee (AJPC) and Consultative Committee of Accountancy Bodies (CCAB) – see below for more details.

ICAEW now issues responses made to consultation documents from government, accounting standard setters and other bodies through the ICAEW REP series (since October 2005) and TAX REP series (since 1999). Prior to these dates, representations were issued as Technical Releases along with guidance in their respective series.

Representations are also published by the other faculties. Further information can be found on the consultations and representations page.

How do all the different series fit together?

The simplified diagram below shows the main sequences and named series from 1972 to date, including the divisions made between guidance and representations: 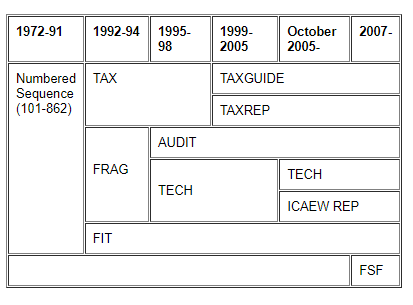 Where can I find Technical Releases and representations?

The Library & Information Service acts as the archive for ICAEW publications and should have all publicly available books and journals published by ICAEW. As part of this archive, we maintain a complete collection of Technical Releases from 1972 onwards and all representations published in the TAX REP and ICAEW REP series.

How can I get a copy of a Technical Release or representation?

New Technical Releases and representations are published in full text on the ICAEW website and can be downloaded free of charge.

Single copies of any historical Technical Releases not available to download from this website may be ordered from the ICAEW Library & Information Service.

Technical Releases and representations have been issued by faculties and groups over the years under different series titles and numbering sequences. You can find timelines by topic and links to browse each series.

Can't find what you are looking for?

If you're having trouble finding the information you need, ask the Library & Information Service. Contact us by email at library@icaew.com or through webchat.

ICAEW accepts no responsibility for the content on any site to which a hypertext link from this site exists. The links are provided ‘as is’ with no warranty, express or implied, for the information provided within them. Please see the full copyright and disclaimer notice.

Expert help for your enquiries and research.